Why Choose an Angular Development Company To Develop Digital Products? 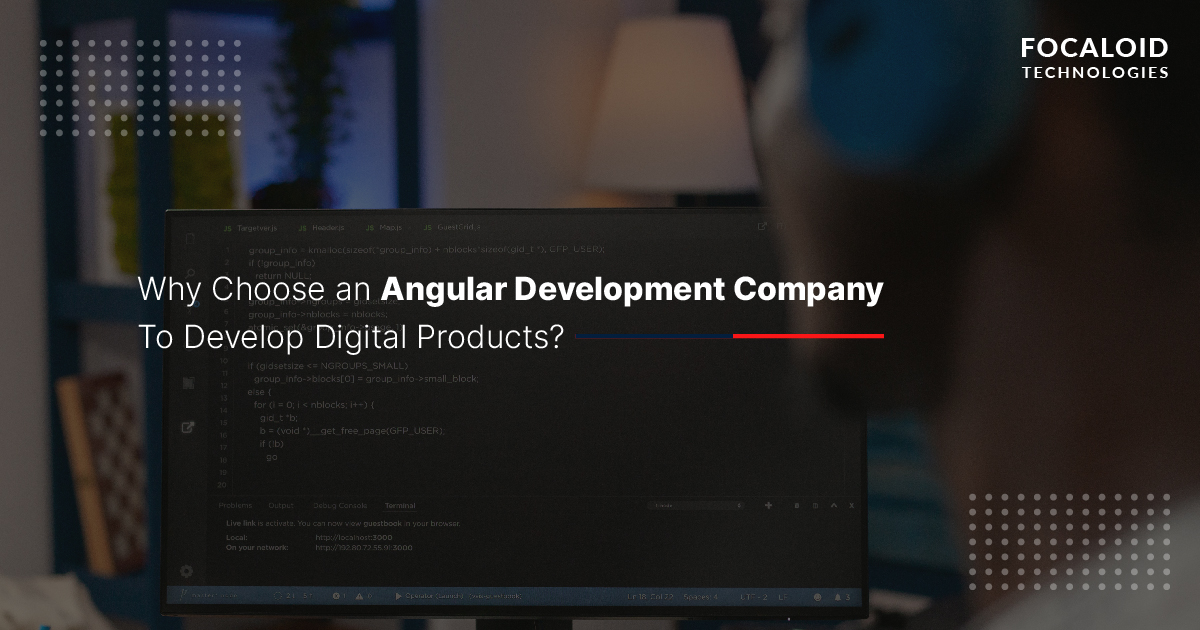 Why Choose an Angular Development Company To Develop Digital Products?

Why choose an Angular Development Company?

Any business in the digital space will know the importance of front-end development. With new technologies emerging rapidly, it is vital to use a viable technology for making mobile and web solutions. So what kind of technology can help you create the best digital solutions? Angular framework. It is one of the best JavaScript frameworks in the industry and is used to develop powerful single-page applications. Hiring an Angular development company can be one of the best steps for a business as it allows you to employ the full power of this framework.

Angular is an open-sourced front-end framework based on JavaScript and developed by Google. It is mostly used to create fast and dynamic web apps. Angular eliminates dispensable code to help create faster and lighter web apps. It has several attractive features like modularization, dependency injection, templating, etc.

Ask any developer at an Angular development company why they went into Angular, and the answer will remain the same, its ease of usage. Developers can use HTML, a very simple language, as a template language for Angular. They can also simply extend the HTML syntax to convey the details of the application. Angular also does not need third-party libraries to make full use of its capabilities. Currently, it is in its 12th iteration.

Why is Angular Preferred by Businesses?

Inconsistent coding is the bane of many developers. It increases the development time as well as cost and leads to delays in deployment. Angular, on the other hand, offers consistent code. This makes its usage much easier and allows developers to make use of predefined code snippets and templates. Compared to its peers, Angular is a far more responsive web design framework.

As the code is consistent, it naturally results in an increase in productivity. Angular development companies can save a lot of time as they no longer need to figure out what a utility or a component does. Its readability also makes it very easy to slot into a current project. When it comes to Angular, you can easily dissect the code and assign different team members to it. And best of all, the code can come together at the end while staying organized.

Developers at any Angular development company love Angular because it is made using TypeScript, which in itself is a superscript for JavaScript. TypeScript is a strongly typed language that is used in Angular and makes the code clean and organized. And a cleaner code means better performance from the code. This also ripped down and ensured a higher level of security. It also helps developers catch and remove errors in the initial stages of programming. Another advantage is that it can be debugged into the browser itself.

Angular addresses maintainability in two ways, by focusing on testability and using TypeScript. Due to it being written in TypeScript, an Angular development company can find out any mistakes they make as they type the code. Developers who are unfamiliar with the codebase can also easily get acquainted with it, thanks to TypeScript. As for the testability, Angular includes a support protractor which helps in end-to-end testing. Further, on upgrading Angular, all its modules are also updated.

Angular uses HTML for making the user interface of its web apps. HTML is very simple and easy to use. Plus, it has a ton of decorative features. This helps developers create highly attractive web applications without investing time in program flows. All that is required is simple definitions, and Angular takes care of the rest.

Angular breaks its code into components called buckets. They’re also called modules by some developers. Buckets or modules make it easier for Angular development companies to organize the functionality of the apps and segregate it into features. These components allow for lazy loading, which is basically loading in the background.

As the modules in Angular are independent, an Angular development company can test each unit separately. It makes the whole process much easier. It also supports the development of highly testable websites, which can help find out any bugs in the future. Its ease of testing means applications made in Angular will always be highly preferred by businesses.

Angular is supported by Google, which offers long-term support to it. This means that Angular will likely have long usability, and its ecosystem will scale further. This makes it a safe bet for any Angular development company. Plus, their developers get the opportunity to learn from Google professionals themselves.

Focaloid as an Angular Development Company

Focaloid, as a leading Angular development company, mixes the innovative approach of our developers with agile concepts to create applications. The extensive experience of our team in Angular, HTML, and other front-end technologies allows them to leverage the modules of the framework flawlessly. Using Angular, we create fast and attractive applications that are integrated with facets of Model View Controller (MVC) and Model View View Model (MVVM). Level up your presence on the web by going for our proficiencies as an Angular development company and transforming your business.

Angular is one of the best JavaScript frameworks and comes with a ton of features to allow the development of faster and better applications. It is a no-brainer to see why so many firms are going for Angular. With guaranteed long-term support, tons of component libraries, and easy scaling, it’s a great choice for any business. Any business looking to carve out a pie out of the web apps market needs to go for an Angular development company.