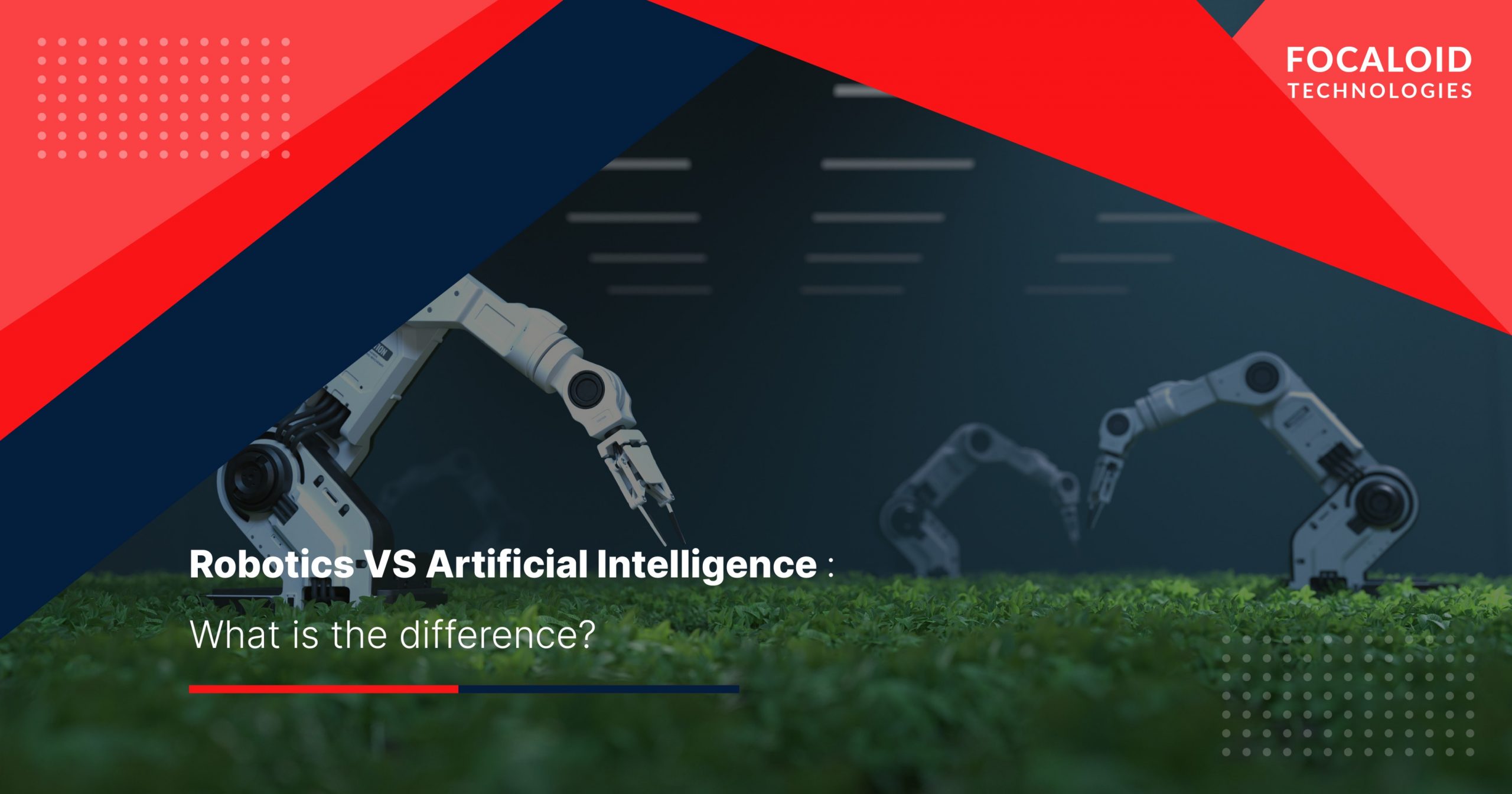 The growing advent of technology is slowly making our life simpler every day. Robotics and Artificial Intelligence are terms that almost everyone is familiar with. With how popular these terms are in pop culture, the actual difference between these technologies might be confusing. Despite the overlapping domains between them, Robotics and Artificial Intelligence are two different things.

You might have seen robots depicted in movies or games, and Robotics is essentially everything that has to do with robots. Robots are machines or automatons that have been programmed to perform a specific task. They can perform this task by executing the code, without any human intervention.

Robots make use of sensors and actuators to interact and function in the world. They can either work on their own or be partially controlled by humans. Robotics involves designing and coding physical robots to perform tasks. If the robot can think, or make decisions, then it usually involves some aspect of Arti.

The reason why Robotics is important is that it enables us to perform tasks without manpower. Things that don’t need decision-making can be automated to save time. This frees up human labor to do more complicated tasks that require critical thinking.

Some of the major applications of Robotics are:

Robots that don’t require human intervention can be employed in combat situations where infantry is unable to function. Additionally, they can be used to locate and disarm bombs.

Because robots follow pre-programmed instructions, they can be programmed to do complex surgeries as well as a variety of medical testing.

Robots are used for inaccessible locations in space and the ocean that people cannot currently visit.

What is Artificial Intelligence?

Artificial Intelligence includes programs written to perform tasks that would otherwise require human intelligence. Several tasks can take up a lot of time when done without technology, like sorting through huge amounts of data to form patterns. These tasks need human comprehension, but Artificial Intelligence can complete them much faster.

There are AI algorithms that exist for perception, logical reasoning, problem-solving, and more. You might have encountered such algorithms while searching on google, or getting suggestions on e-commerce platforms like Amazon. Artificial intelligence usually comes hand in hand with Machine Learning, which involves training an algorithm with data to predict certain values.

Although AI doesn’t have anything to do with Robotics, it can be used to design intelligent robots.

Some of the major applications of Artificial intelligence are:

Artificial intelligence is crucial in strategic and mentally challenging games like chess, or poker. Here the machine must consider every strategy it might use to challenge the players.

Software-enabled devices that offer assistance, counsel, and recommendations to users in need are called Aid Systems, and they make use of AI.

These are programs that can scan a visual input and analyze the same. They are used by drones to map areas, or by doctors to provide diagnoses.

Some systems can read handwriting and decipher characters, and then process the data to produce standard text.

Artificially intelligent robots are the intersection of the two technologies. They are robots that are capable of doing tasks with intelligence. Conventional robots are used to carry out repetitive tasks, and can’t make decisions on their own. Artificial Intelligence makes it possible for them to do more complicated tasks.

There are other kinds of robots, called software robots, which can make the distinction between Robotics and Arti confusing. However, it is important to note that the two are separate technologies, although they can be combined to form artificially intelligent robots.

Software robots are robots that are not physical, but software programs that can complete virtual tasks. They include search bots, process automation robots, chatbots, and more.

Robots can do jobs with many sensors and data processors thanks to AI. AI robots become more effective with machine vision, speech recognition, data interpretation, and more. AI Robots can carry out jobs when given instructions by people. They have sensors that can pick up on things like temperature, noise, light, movement, etc.

They are also flexible and capable of learning on their own. Robots can use sensors to gather data about their surroundings, but AI also enables them to turn that information into an application when given a task. Additionally, it enables the robot to observe, retain, and learn from the data.

Some examples of artificially intelligent robots are:

REV-1 Delivery Robot: Delivers goods in metropolitan areas, and can work in all weather.

ZenRobotics: For recycling and a variety of sorting

They can also be used in broad industries like:

This is one of the main benefits of artificially intelligent robots. With chatbot-like communication skills and cutting-edge processors, they can help anyone, especially elder or mentally ill people.

AI bots for agriculture assist farmers by reducing their workload.

Robots can replace troops and save lives while spying through voice and vision sensors.

As we have mentioned above, robots can be employed for exploration in space, deep oceans, extremely cold environments, or volcanoes. With the help of AI, they can get more accurate information.

They can also carry out difficult operations that are more prone to human error. Robotics with AI integration could significantly lower the number of casualties in healthcare.

Differences Between Robotics and Artificial Intelligence

There are several aspects in which we can differentiate between Robotics and Artificial Intelligence.

A robot is a device with a physical form that might or might not need intelligence to carry out particular tasks. AI is a program written in code, so it need not be physical.

Robots, smartphones, and laptops can all run AI software, which is connected to algorithms that can analyze data and compute results.

Robots can be programmed, and they use sensors to interact with their environment. Based on the context of their operation, they can be automated or semi-automatic.

Algorithms and Machine learning are key components of AI. AI develops its logic and decision-making processes.

The goal of a robot is to make life easier and boost productivity at work. A  precise definition of a robot makes no mention of learning. Robot design involves physical construction, environmental designing, and programming.

The whole point of AI is to make technology more approachable. GPS trackers, improved navigation systems, chatbots for customer service, and other devices use AI engines. It is used in instances where there is information available from which learning is possible.

Where Does Focaloid Come In?

Focaloid is one of the most trusted names for IT services. We provide technical support and work with companies of all sizes. Our digital solutions can help your business grow into one that can thrive in today’s market. It is necessary to grow your business, no matter how big or small it is. And our solutions can help you gain better profits by tapping into the technical potential that is available today.

Both Robotics and Artificial Intelligence are complicated, but effective technologies that can help your business boost its profits. In the internet era that we live in, there is an abundance of data everywhere, and we can help you use this data efficiently. Some of the other services we offer include IoT, Cloud Computing, Big Data Analysis, Product managing, and more.

As we have seen above, Robotics involves designing and creating robots, while Artificial intelligence has more to do with creating programs with intelligence. The two are different technologies, and each of them has its own set of applications and uses.

Human curiosity encourages us to give rise to more innovative solutions every day. By combining Artificial Intelligence and Robotics, a wider range of possibilities open up.

Although they can seem confusing, we hope the above article has given you a clear idea about what Robotics and Artificial Intelligence do and what their differences are. Robotics and Artificial intelligence have their uses in areas from military technology to household appliances. Both these technologies are game changers and are revolutionizing the very way in which we see and interact with the world.

Quality Assurance: Why It’s Important and How to Excel In That Area

E-commerce Website Development 101: A Comprehensive Guide to Set Up Your Online Store